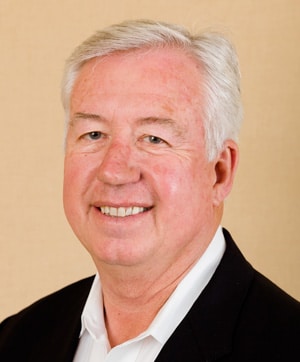 Throughout his career, Robert F. O’Loughlin has managed some of the industry’s top properties and has directed regional hotel operations throughout the United States.

O’Loughlin began his career in 1967 as Assistant Controller for the Hilton Hotels Corporation. From 1970 to 1973, O’Loughlin held management positions at the Terrace Hilton Hotel in Cincinnati. Under his direction, the 450-room hotel consistently ran a 70% occupancy, leasing five floors of retail space as well as training facilities for AT&T Long Lines. He operated a five-star restaurant during a time when there were only 13 5-star restaurants. Additionally, he opened Joe’s Bar, a banjo and sing-along establishment that became a Cincinnati favorite.

In 1973, O’Loughlin was named general manager of the Oakland Hilton, a 300-room airport hotel. He was the youngest manager in the history of the Hilton organization. The property had a three year record of operating losses in excess of $100,000. By implementing an aggressive marketing program and controlling costs, the property broke even the first year and went on to make a $150,000 profit the third year. The turnaround justified a 100-room expansion to accommodate a successful 70% occupancy hotel.

O’Loughlin became General Manager of the 600-room San Francisco Airport Hilton in 1975. There, he supervised a critical $4 million renovation and construction project, which included an 11,000 square foot ballroom, remodeling guest rooms, and doubling the sizes of the restaurant, bar, coffee shop and lobby. The project proved successful, netting the Hilton a $2 million profit for the next five years. O’Loughlin also booked $2.5 million in conventions, including the West Coast Ladies Apparel Show, which had previously been held at the Sheraton Palace Hotel for 22 years. This was the largest convention business in the history of the San Mateo County airport area.

An opportunity to manage a 900-room convention hotel came in 1977 when O’Loughlin joined AIRCOA, Inc. to become general manager of the St. Louis Clarion Hotel, at the time the largest hotel in the state of Missouri. It became the most profitable of Aircoa’s 45 hotels in terms of revenue and profit for eight consecutive years. O’Loughlin completed the extensive remodeling of the revolving restaurant, lobby, lobby bar, and the addition of a luxury suite wing. The restaurant received several awards, including “Best 100 Restaurants in St. Louis” and national recognition for the best table top design.

Within three years, O’Loughlin was appointed Regional Director of Operations for Clarion, responsible for hotels in eight U.S. locations, including New Orleans, Louisiana; Cincinnati, Ohio; Sacramento, Marin, Napa Valley, San Francisco, San Diego, and Ontario, California. O’Loughlin was named General Manager of the Year for AIRCOA in 1978 and in 1985 Hotelier of the Year by the Missouri Hotel/Motel Association.

In 1986, he established Lodging Hospitality Management (LHM) and has been responsible for successfully managing more than 50 hotels for individuals and institutions, as well as working with financiers seeking a high return investment. In the nearly 30 years LHM has been in business, O’Loughlin has developed five ground-up hotels, including the Hilton Garden Inn Chesterfield, Hilton Garden Inn O’Fallon, Hilton Garden Inn St. Louis Airport, Four Points Fairview Heights and the Moonrise Hotel. Through his leadership, he has established LHM as one of the preferred management companies for Hilton, Starwood, Marriott and Holiday Inn.

O’Loughlin has held offices in several organizations, including President of both the St. Louis Hotel/Motel Association and the Missouri Hotel/Motel Association, first Vice President of the St. Louis Convention and Visitors Bureau, and Chairman of the Missouri Tourism Commission. In 1993, when the St. Louis Convention and Visitors Commission was without a President, O’Loughlin voluntarily stepped in and successfully took over the management of the CVC, eventually hiring a President. He is a member of several community and business groups, including the Civic Entrepreneurs Organization, St. Louis Ambassadors, Downtown St. Louis, Inc., and the Missouri Athletic Club and Regional Business Council. He also serves on the board of Enterprise Bank.